On the Poets.net forum, Jepson said:

I read in one of the blogs an argument about performance poetry. One person argued that there is no such thing. They argued that performance poetry is a cheap tactic needed because the poetry is so bad. I don't think it has to be that way. I think if you start with well written poetry on paper then it will make everything else easier. I think we need to breathe some life back into poetry, and that needs to start before we ever go knocking on the publisher's door.

Poetry has become stuffy. It's mutated into this thing we tote around in university textbooks so that academics can browbeat it all day long. We might as well be selling long division. We need to motivate, uplift, piss off, and inspire our audience. It needs to move beyond the 'poets who love poets' club and start a grassroots movement of new readers.

You find an audience who wants to read/hear your work and there won't be any need to enter publishing 'contests.' The publishers will come to you.

I think you are speaking to the heart of the matter. The young Philip Sidney was a rock star before there was such a thing.

I hate to blame TS Eliot, because there's many people to blame, and TS Eliot couldn't help it that he wrote a great poem (Prufrock) and then grew old, but...Eliot with his 'difficulty' agenda and his reading/speaking fame which coincided with his old age did a lot of damage to poetry as an exciting art for the young. 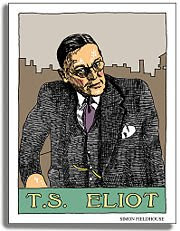 Fame has to be carefully crafted before it 'explodes.' The conditions have to be right. The manufacture of Poetry Fame has been handled very badly in the last couple hundred years. It hasn't really been handled at all. Poetry needs cunning Managers.

I've been listening to the 'Poetry Speaks' series of CDs of famous poets reading their work, introduced by Charles Osgood. Anyway, what one notices is the voices are those of old men who sound like frogs or business executives. This is mostly due to the fact that poets don't acquire the fame to get themselves recorded until they are old, and recording technology was just beginning as poets born in the 19th century were getting old.

Of course old men and women should write and read their poetry. Don't get me wrong. But let's be frank about what it takes to get crowds lining up around the block to 'see' poetry. Old TS Eliot could get such crowds, though I think this was mostly at universities. TS Eliot's best stuff also was not 'difficult.' "Prufrock" and "Hollow Men" and a few others are anything but 'difficult.' Eliot had it, whatever it was, although he was a depressed person, beset with personal issues, and so he couldn't bring it very often, I suspect.

If we divide the world into four parts, we have song and story in the 'fiction' realm and info and inference in the 'reality' realm. The two sides of existence, fiction and reality, each have two distinct parts which are exact opposites of each other.

Song is brief and bounded, but its pleasure is indefinite. Story is long, and its pleasure is more definite. Story's popularity (think of novels and film) is based on the fact that the audience becomes immersed in the story of other human beings--the pleasure is based on an acute identification with another human reality. You watch a good play or movie and you are totally absorbed by character and what will happen to them and what they might do to each other. It is the replication of life which we enjoy, and we escape into its existence.

Song, on the other hand, or the poem, allows our minds to wander. Who has not experienced this at a poetry reading? You find yourself thinking of other things. Or sitting at a concert, listening to a piece of music? We free-associate as we listen to the music, whereas if you are watching a good play or film, you are fixated on the protagonist and watching his every move. Even a simple pop song begins a little concert within our own bodies, a sensual pleasure that is not grounded on exact information, but on indefinite feelings. A good play or movie has you interested in what is happening on the stage/screen. A song affects us differently.

So 'song' produces an indefinite pleasure, while 'story' produces a definite one. And songs are not 'difficult.' I was just listening to the current best-selling rock act, "The Black Keys:" their new album, "Attack and Release." It's new, the band is young, it's selling well, but it's just the blues! Their songs are not 'difficult.' Your mind is allowed to wander as you listen to it. Their songs do not demand you pay attention to every note. The chord changes are terribly obvious (it's the blues!) and the drums are obvious and the lyrics are dreamy and simple.

Let's now examine the other realm. In 'reality,' the info is like the 'song,' since it is brief and has definite attributes and a certain internal logic, but here a 'definite' thing is expressed--the information. "Here's how you fix a roof or bake bread." "Would you hand me that hammer, please?" This is how we convey information to each other: through clear, step-by-step, "information-songs." 'Story' is definite in the fiction realm, but indefinite in the reality realm, for here 'story' stands for all the random bits and sensations and speculations and gossip of which life is comprised. 'Story' is the free, random, immersion aspect of 'reality.' It is indefinite.

The poets erred with the 'difficult' poem. For as the mind strives to understand the 'difficult' poem, it cannot possibly enjoy the song-pleasure. The song-pleasure never forces the mind to think; on the contrary, it frees the mind and allows the senses to enjoy the song (poem). When I listen to Robert Frost and Wallace Stevens read their poetry aloud in these recordings, I don't find I enjoy it at all. Both men strive to be philosophical and thoughtful in their poems and to listen to them read is just a huge bore. And I like these two guys on the page.

But listening to them made me realize something.

OLD MEN READ THEIR DIFFICULT POEMS! DON'T MISS IT! COME ONE, COME ALL!