(The comment feature for this topic has been turned off and moved here. All comments have also been moved. To comment on the new forum, you will have to join the forum, which is fast, easy, and free.)
*
Update 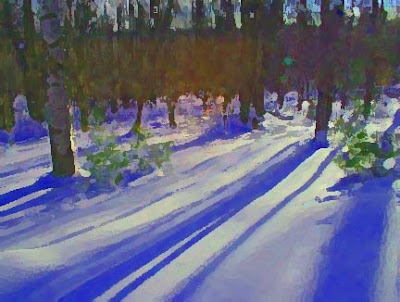 After Uncle revealed his favorite poems, I asked him to explain what it is about "Stopping by Woods on a Snowy Evening" and the other poems that attracts him. He said,

Jennifer, You are giving me too much credit and I love it but I am not deserving all the commentary. As you know I was blessed with 3 boys and felt compelled to be a boy scout leader and felt the army training would make me able to offer some ideas to young boys to compete in the future. The poems you refer to are set in the wild wilderness and immediately survival comes to mind and living with nature. You could find a big gold deposit or silver but the real need is food so these poems tell me how to find, identify and eat roots etc. but most of all they paint a beautiful picture in my mind of harmony with nature catching fish and living off the land. Somehow today's concerts and protests ruin the beautiful mental picture. They also offer 2 options as to which path to take but you are aware that animals made the trails so you know there has to be food on both but evil in man has to try to imagine which path has a sucker to fleece [Bold admin emphasis].

You are in the right mode of thought as I do not know a single today poet.

What are your thoughts on Uncle Lyle's comment about imagining the path that "has a sucker to fleece"?

My favorite poets and I do not know many so you will get a narrow view. Frost and Poe.

"The Road not Taken" = Frost

"Stopping by the Woods on a Snowy Evening" = Frost

"A Dream Within a Dream" = Poe

Uncle Lyle didn't answer question #2, which I think is telling and offers a possible commentary on the state of modern poetry: that today's poets tend to write and publish for other poets and academia--and NOT for the literature students that sit in their classes or the general public.

Lyle also noted Poe's short story "The Pit and Pendulum" as a favorite.

So why do these two writers endure while many of their contemporaries have fallen along the wayside? Perhaps we can find clues within their own poems:

A Dream Within A Dream

Take this kiss upon the brow!
And, in parting from you now,
Thus much let me avow-
You are not wrong, who deem
That my days have been a dream;
Yet if hope has flown away
In a night, or in a day,
In a vision, or in none,
Is it therefore the less gone?
All that we see or seem
Is but a dream within a dream.

I stand amid the roar
Of a surf-tormented shore,
And I hold within my hand
Grains of the golden sand-
How few! yet how they creep
Through my fingers to the deep,
While I weep- while I weep!
O God! can I not grasp
Them with a tighter clasp?
O God! can I not save
One from the pitiless wave?
Is all that we see or seem
But a dream within a dream?

Stopping By Woods On A Snowy Evening

Whose woods these are I think I know.
His house is in the village though;
He will not see me stopping here
To watch his woods fill up with snow.

My little horse must think it queer
To stop without a farmhouse near
Between the woods and frozen lake
The darkest evening of the year.

He gives his harness bells a shake
To ask if there is some mistake.
The only other sound's the sweep
Of easy wind and downy flake.

The Road Not Taken

Two roads diverged in a yellow wood,
And sorry I could not travel both
And be one traveler, long I stood
And looked down one as far as I could
To where it bent in the undergrowth;

Then took the other, as just as fair,
And having perhaps the better claim,
Because it was grassy and wanted wear;
Though as for that the passing there
Had worn them really about the same,

And both that morning equally lay
In leaves no step had trodden black.
Oh, I kept the first for another day!
Yet knowing how way leads on to way,
I doubted if I should ever come back.

I shall be telling this with a sigh
Somewhere ages and ages hence:
Two roads diverged in a wood, and I—
I took the one less traveled by,
And that has made all the difference.

All three poems seem appeal to both academic and a general audience.