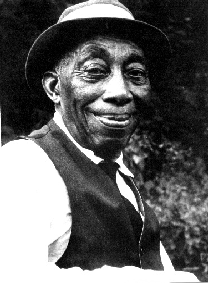 "What'd I care about your two little babes and darling, loving wife?
You done stole my Stetson hat, I'm bound to take your life."
That bad man, oh cruel Stagolee

Gentlemens of the Jury,
What you think of that?
Stagolee killed Billy DeLyon
'bout a five-dollar Stetson hat.
That bad man, oh cruel Stagolee

Standin' on the gallows, head way up high
At twelve o'clock, they killed him, they's all glad to see him die
That bad man, oh cruel Stagolee

"Stagolee," a short story by Julius Lester, was published in Black Folktales (1969) and is well worth reading. Stagolee is considered to be an African-American folk hero, a mythical man who outsmarted both death and the devil. After a series of events in which Stagolee eluded hanging, Stagolee was finally summoned by Death and escorted to hell, where he...well, you'll just have to read Lester's short story to find out what happens next.

The real Stagolee, real name Lee Shelton, was less heroic than his fictional counterpart; a story appearing in the St. Louis, Missouri Globe-Democrat in 1895 says:

William Lyons, 25, a levee hand, was shot in the abdomen yesterday evening at 10 o'clock in the saloon of Bill Curtis, at Eleventh and Morgan Streets, by Lee Shelton, a carriage driver. Lyons and Shelton were friends and were talking together. Both parties, it seems, had been drinking and were feeling in exuberant spirits. The discussion drifted to politics, and an argument was started, the conclusion of which was that Lyons snatched Shelton's hat from his head. The latter indignantly demanded its return. Lyons refused, and Shelton withdrew his revolver and shot Lyons in the abdomen. When his victim fell to the floor Shelton took his hat from the hand of the wounded man and coolly walked away. He was subsequently arrested and locked up at the Chestnut Street Station. Lyons was taken to the Dispensary, where his wounds were pronounced serious. Lee Shelton is also known as 'Stagger' Lee. (The Story of Stagger Lee in the Riverfront Times of St. Louis).

Lyons eventually died of his injuries. Shelton was tried, convicted, and served prison time for this crime. This otherwise unmemorable crime is remembered in a song. In some older versions of the song, the name of the other party is given as "Billy Deslile" or "De Lion."