Poetry in Music: "Sounds of Slience" (Simon and Garfunkel) Concert in Central Park 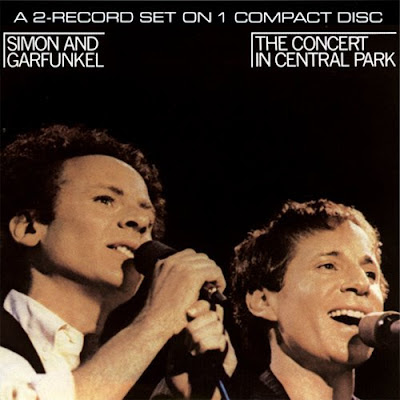 The Concert in Central Park is a live album by Simon and Garfunkel. On September 19, 1981, the folk-rock duo reunited for a free concert on the Great Lawn of New York's Central Park attended by more than 750,000 people. They released a live album from the concert the following March (Warner Brothers LP 2BSK 3654; CD 3654). It was arranged by Paul Simon and Dave Grusin, and produced by Paul Simon, Art Garfunkel, Phil Ramone and Roy Halee.

A video of the concert was also released. The video contains two songs that were omitted from the live album: "The Late Great Johnny Ace" and "Late in the Evening (Reprise)". The song about Johnny Ace had been disrupted by a fan rushing the stage. Both of these songs appear in the DVD release. The Late Great Johnny Ace is not listed in the track listing but appears between A Heart in New York and Kodachrome.

From Wikipedia. For more information and track listing, click here.

Home
Posted by Jennifer at 1:35 PM