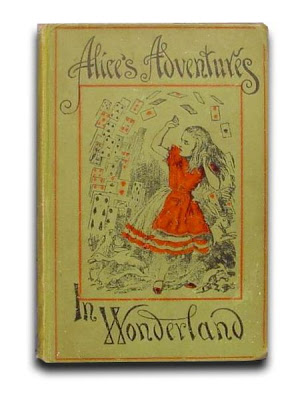 Chapter I: Down the Rabbit Hole

Alice is bored of sitting on the riverbank with her sister, who is reading a book. Suddenly she sees a white rabbit run past wearing a coat and carrying a watch, lamenting running late. She follows it down a rabbit hole and falls very slowly down a tunnel lined with curious objects. She lands in a long hallway lined with locked doors. She finds a little key sitting on a glass table. Behind a curtain on the wall she finds a tiny door that opens with the key and leads into a beautiful garden. The door however is too small for Alice to fit through. Looking back at the table she sees a bottle labelled "DRINK ME" that was not there before. She drinks and it causes her to shrink to a size small enough to fit through the door. Unfortunately Alice has left the key high above on the table. She finds a box under the table in which there is a cake with the words "EAT ME" on it. She eats it, thinking that if it makes her smaller she can creep under the door and if it makes her larger she can get the key.

Chapter II: The Pool of Tears

The cake makes Alice grow so tall that her head hits the ceiling. Getting frustrated, she cries. Her tears flood the hallway. The White Rabbit runs by and is so frightened by Alice that he drops the gloves and fan he is holding. She fans herself with the fan and starts to wonder if she is still the same person that she was before. The fan causes her to shrink again. Alice swims through her own tears and meets a mouse, who is swimming as well. She tries to make small talk with him but all she can think of talking about is her cat, which offends the mouse. The pool becomes crowded with other animals and birds that have been swept away. They all swim to shore.

Chapter III: A Caucus Race and a Long Tale

The first question is how to get dry again. The mouse gives them a very dry lecture on William the Conqueror. A Dodo decides that the best thing to dry them off would be a Caucus-Race. The Dodo marks out a race course in a sort of circle and the racers begin running whenever they feel like it, and everyone wins. Alice reaches into her pocket and finds a box of comfits which she distributes among the winners. The animals then beg the mouse to tell them something more and he recites a tale about a mouse and Fury. Alice mistakes his tale for his tail. This insults him and he leaves. She starts talking about her cat again, which frightens the rest of the animals away.

Chapter IV: The Rabbit Sends in a Little Bill

The White Rabbit appears again and orders Alice to go back to his house and fetch him his gloves and fan. Inside, she finds another bottle and drinks from it. Alice grows so large that she has to stick one arm out the window and her foot up the chimney. The horrified Rabbit orders his gardener, a lizard named Bill, to climb on the roof and go down the chimney. As Bill slides down the chimney Alice kicks him out with her foot, shooting him up into the sky. Outside Alice hears the voices of animals that have gathered to gawk at her giant arm. The crowd hurls pebbles at her, which turn into little cakes that shrink Alice down again. She runs into the woods, where she decides that she must get back to her right size and she must find the lovely garden. Suddenly Alice is confronted by a giant puppy. She picks up a stick and teases him with it until he is tired and she can run away. She comes upon a mushroom and sitting on it is a caterpillar smoking a hookah.

Chapter V: Advice from a Caterpillar

The Caterpillar questions Alice and she admits to her current identity crisis. He asks her to recite "You Are Old, Father William". She does so, but it comes out with many errors. She insults him by saying that three inches is a wretched height to be (he himself is three inches tall). The Caterpillar crawls away into the grass, telling Alice that one side of the mushroom will make her taller and the other side will make her shorter. She breaks off two pieces from the mushroom. One side makes her shrink smaller than ever, while another causes her neck to grow high into the trees, where a pigeon mistakes her for a serpent. With some effort, Alice brings herself back to her usual height. She stumbles upon a small estate and uses the mushroom to reach a more appropriate height.

A Fish-Footman has an invitation for the Duchess of the house, which he delivers to a Frog-Footman. Alice observes this transaction and, after a perplexing conversation with the frog, welcomes herself into the house. The Duchess' Cook is throwing dishes and making a soup which has too much pepper, which causes Alice, the Duchess and her baby (but not the cook or her grinning Cheshire-Cat) to sneeze violently. The Duchess tosses her baby up and down while reciting the poem "Speak roughly to your little boy." The Duchess gives Alice the baby while she leaves to go play croquet with the Queen. To Alice's surprise, the baby later turns into a pig, so she sets it free in the woods. The Cheshire-Cat appears in a tree, directing her to the March Hare's house. He disappears but his grin remains behind to float on its own in the air.

Alice becomes a guest at a mad tea party, along with the Hatter, the March Hare, and the Dormouse. In the course of the party, Alice reveals that the date is May 4 (which happens to be the birthday of her presumed real-life counterpart, Alice Pleasance Liddell). The other characters give Alice many riddles and stories, until she becomes so insulted that she leaves, claiming that it was the stupidest tea party that she had ever been to. Alice comes upon a door in a tree, and enters it, and finds herself back in the long hallway. She opens the door, eats part of her mushroom, and shrinks so she can get into the beautiful garden.

Now in the beautiful garden, she comes upon three living playing cards painting the white roses on a rose tree red because the Queen of Hearts hates white roses. A procession of more cards, kings and queens and even the White Rabbit enters the garden. Alice meets the violent Queen and pacifying King of Hearts. The Queen orders "Off with their heads!" when she sees the work of the gardeners. A game of croquet begins, with flamingos as the mallets and hedgehogs as the balls. The Queen condemns more people to death, and Alice once again meets the Cheshire Cat. The Queen of Hearts then debates chopping off the Cat's head, even though that is all there is of him. Alice suggests talking to the Duchess, so the Queen orders the Duchess out of prison.

The Duchess is brought to the croquet ground. She is now less angry and is always trying to find morals in things. The Queen of Hearts dismisses her on the threat of execution and introduces Alice to the Gryphon, who takes her to the Mock Turtle. The Mock Turtle is very sad, even though he has no sorrow. He tries to tell his story about how he used to be a real turtle in school, which The Gryphon interrupts so they can play a game.

Chapter XI: Who Stole the Tarts?

At the trial, the Knave of Hearts is accused of stealing the tarts. The jury box is made up of twelve animals, including Bill the Lizard, and the judge is the King of Hearts. The first witness is the Mad Hatter, who doesn't help the case at all, followed by the Duchess's Cook. During the proceedings, Alice finds that she is steadily growing larger when she is suddenly called as a witness herself.

Alice accidentally knocks over the jury box as she stands in alarm. She argues with the King and Queen of Hearts over the ridiculous proceedings, eventually refusing to hold her tongue. The Queen shouts her familiar "Off with her head!" but Alice is unafraid, calling them out as just a pack of cards. Alice's sister wakes her up for tea, brushing what turns out to be some leaves and not a shower of playing cards from Alice's face. Alice leaves her sister on the bank to imagine all the curious happenings for herself.