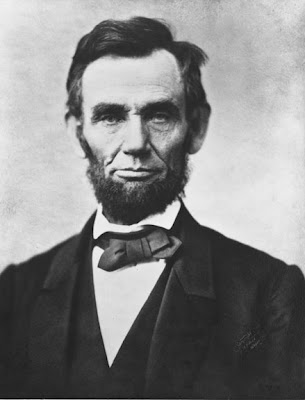 Dedicated to Abraham Lincoln, of Illinois, and Andrew Johnson, of Tennessee

In the glorious days of old,
When all manly words were gold,
The pledge of haughty Southern Knight
Was held as true and kept as bright
As if it had been coined in heaven,
And to the world by angels given.

But when the curse of slavery fell,
As though a pestilence from hell
Had poisoned all the land!
A direful demon took command;
And they who owed their country all,
Struck at her life, contrived her fall,

But first they broke their solemn word,
Before they drew the murderous sword,
Forgot their creed, so orthodox,
And scorned the sacred ballot-box;
Then here, where Freedom's temple stood,
Tried to let loose the tide of blood.

Oh! doubtful day, four years ago!
When, threatened by the assassin foe,
Our President was sworn to stand
By God and by his Native Land;
But traitors failed, because they knew
Their plots were clear to patriots true.

And when the fiends of civil war
Filled all the South with blood and fire,
Long swayed the dreadful, doubtful fight,
And the world shuddered at the sight:
Thousands of all our boldest braves
Fought, fell, and died in honored graves.

For days, for months, for lingering years,
This strife of kindred and this flow of tears,
Was grimly fought and bitterly maintained
Till none could tell which side had gained:
But now, at last, a rescued nation
Hails here her perfect vindication.

And God is good, for he has said,
(Oh voice to wake the myriad dead!)
If your first oath was sworn in gloom,
Unknowing then your fate or doom;
At your to-day's inauguration
You do behold your land's salvation.

No scowling traitors in this hour
Will dare to thwart the people's power:
No forsworn plotters can implore
That Freedom's temple may run o'er
With the heart's blood of him who won
The post twice filled by Washington.

For like to him so Lincoln ran
The race for Liberty and Man,
And like to him a people's voice
Proclaimed him twice the nation's choice;
And by this act have set their seal
To show the gratitude they feel.

Now as the President ascends
Yon marble flight, and lowly blends
Before the majesty of the laws,
And vows to serve his country's cause,
Nothing but victory for the Union
Will gladden all that vast communion.

Before him frown no angry foemen,
For all are friends and sturdy yeomen;
But gazing up and to him listening,
Behold the face of Johnson glistening--
He who in renowned December
Fought the great fight we all remember;

Who, without sign of fear or favor,
Struck 'gainst traitors with best endeavor--
Made them quail beneath his glances,
And fly before his bold advances,
And now, from rescued Tennessee,
Takes part in this, Our Jubilee.

Oh! History, with thy impartial pen,
Tell us in what age of godlike men
Hast thou been ever called to write
A page so wondrous and so bright?
Where is the struggle that can equal
That of which to-day's the sequel?

From the Chronicle Junior.

Printed in the Inauguration Procession of Lincoln & Johnson. 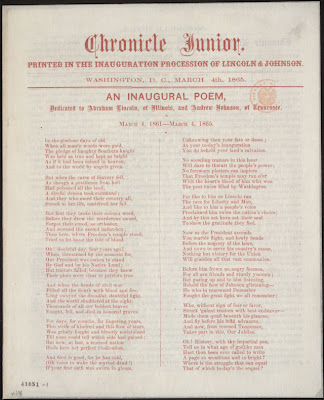