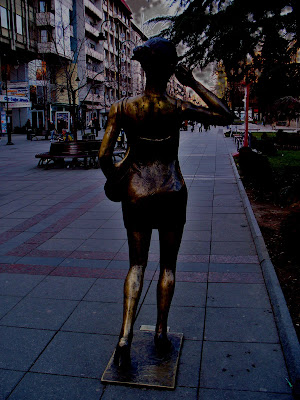 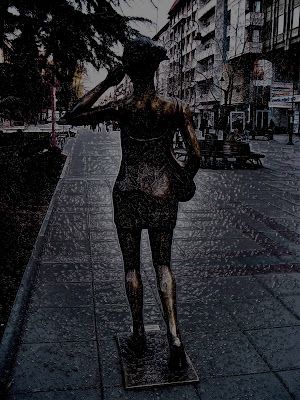 The Skopje sky is like a silver blister, ready to splash its contents all over this city of statues. So monotonous, concrete, enveloped in a mist of exhaust fumes and the noise of heels on top of the shrill voices of street vendors. Little barefoot children, splashing in the puddles from yesterday’s downpour, chasing people, begging for spare change. Chestnuts being roasted on every corner. Massive billboards hover above our heads.

We escape into a café. We haven’t seen each other in a while. Not much is different. Mya has changed her hair back as it was three years ago. It still makes her look older. “That’s what I was going for,” she always said, when we strove to find something pleasant to remark after her unfortunate visits to the hairdresser’s. But she doesn’t really care. She never has.

I came here to write, Mya came with me to dispel the awkwardness, as if to write in public were a crime, a kinky thing to do. We pick a spot in the back, dark, understated corner; we didn’t come here to be seen, we came here to see each other, catch up.

I place a notebook in my lap, I cover it with my scarf, so that people won’t see, won’t wonder, won’t judge. We order. “An espresso for me,” I say to the waitress, while Mya is in the mood for tea.

The day has descended heavily on the city today. We walked for only fifteen minutes to get here, no more, and yet, we’re drained.

The grim day follows us through the window. The lights on the upper floor are lit, giving our surroundings the sweet mellow hue of an almost ripe peach. A soft cloud of cigarette smoke hovers, squeezing through the railing. I spot a pinch of cinnamon with the tobacco. I should have ordered something with cinnamon.

A couple is positioned in the booth across from us. They’re like ghosts; they’re made into bland shadows by the light throwing itself in from behind their backs. They sit apart, she on the sofa, he on a recliner. Two cups and a sugar shaker rest on the table between their legs. 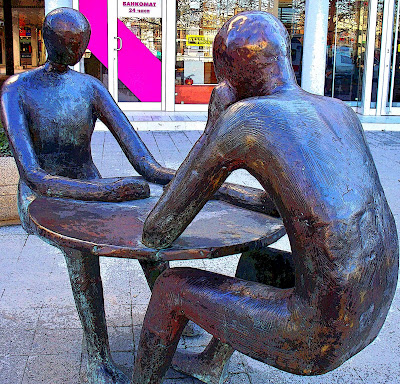 I notice the God-awful, Macedonian pop music in the background. This used to be a classier place. Smooth jazz, world music, gigs in the evenings. Today, we’re surrounded by guys with the same haircuts, sporting the same striped sweaters and ray-bans on a day with no sun at all. Almost all the girls have their hair in a bun. That’s one trend I’ve missed out on lately, I guess.

She flips through the menu as one would do at a dentist’s waiting room. His eyes are lifted towards the flat-screen, but do not meet it. The air between the two of them seems thicker than the rest of it. 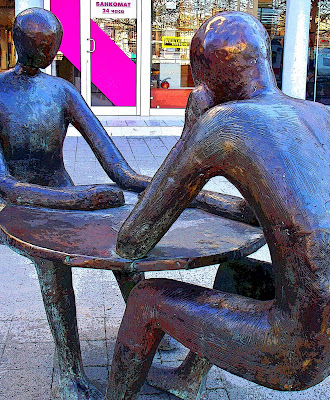 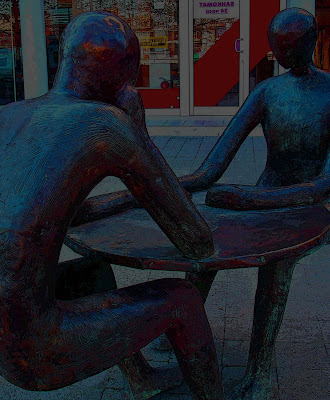 In all my eagerness to get warm, I take a sip from my coffee. I burn my tongue. I set the cup down while my face twists in a knot.

Mya cracks up. “Rash!” She smiles and dips the tea bag in her cup. I cringe and look away again.

He’s playing with a lighter. His elbows are on his knees, his head in a bow. She sits there with her hands joined on the side of her hip. They share no words. 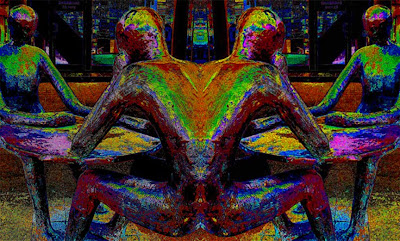 Mya speaks about her summer vacation; about her studies; about her boyfriend’s studies. They’ve been together for ages. I listen with only one ear. She talks about the last party I missed, about a semi-known singer and her lover who is her neighbor, about another friend’s feud with one of her professors. I scribble in my notebook.

He adds some sugar to his coffee and twirls the spoon in it with a lightness of wrist often met in men whose only physical activity in the day is this circular aerobic workout. He lifts the sugar halfway towards her, not looking. Her head, as in a twitch, shakes to say no. He pulls it back softly. 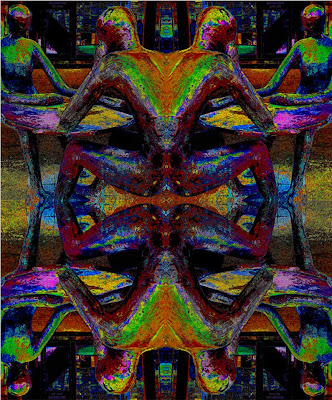 Mya starts talking about the time her boyfriend and she were pulled over by a police officer for speeding and they cheated out of it by pretending she had appendicitis and he was rushing her to the hospital. She says it would have been pretty nasty if they hadn’t found a way out, since they were pretty much intoxicated and ever so slightly high, at least he was. She sees I’m amused, so she becomes even more animated in telling. Her hands are flying around. It’s not the story I’m so entertained by -- this is the fourth time I’ve heard it -- but I had never heard it from her. I laugh because I notice how the story has morphed from one gossip’s mouth to the next. Or maybe she is just spicing it up for me. She does that sometimes. Now, I’m not saying she is a liar or anything of the sort; she just likes things a little bit over the top. Like that shirt she is wearing. Too… pink. My glance strays from her once again.

The waitress places a bill on their table, joining their vow of silence and walks away, as with people she knows, people she trusts. He places two bills on top of it without looking at it. She is already in her coat and extends a step towards the door.

Mya asks how I’ve been doing these last few months. I sigh. I start speaking of meaningless things, minor endeavors, bumps on the road. Mya listens as if I’m relating the truth about the origin of the Universe. It’s always been baffling to me; I never managed to develop that keen interest in other people’s affairs. Still, I babble on.

She pushes the heavy glass door and is out of the café, while he’s still battling with one of the sleeves of his jacket. He catches up with her and his arm goes dryly around her hip, like two tree trunks fighting for territory. They walk out of sight. The crisp air from when she opened the door arrives in our corner. They’re replaced by a solitary, pale statue of a pained woman wrapped around a guitar on the promenade. 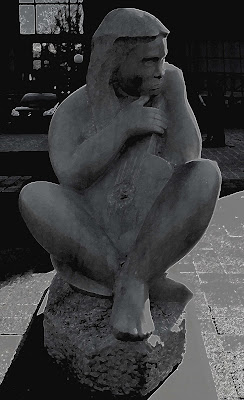 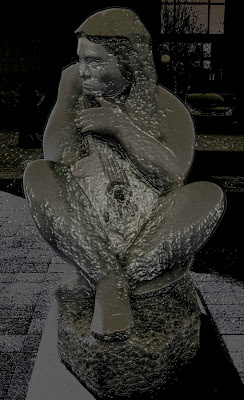 It’s one of those new, ugly ones, completely ridiculous. They haunt this city. It’s like Skopje doesn’t need its mortal citizens anymore. It has its new, sound-proof, marble and gypsum ones. 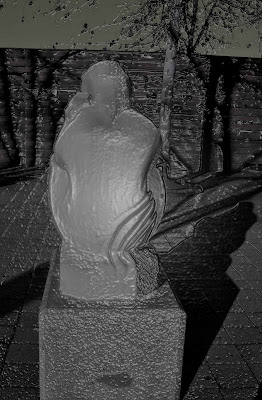 Ana Lakaliska is a student of English language and literature at the Ss. Cyril and Methodius University in Skopje, Macedonia. She has been writing from an early age and has won a number of local and national awards for her poetry. Some of her poems have appeared in collections and publications from competitions, as well as Macedonian newspapers and periodicals.

“People with Burnt Tongues” is copyright 2010, by Ana Lakaliska. All rights are reserved. This story may not be reprinted or reposted without permission from the author.

The Skopje images/artwork are copyright 2010, by Jennifer Semple Siegel and may not be reprinted or reposted without permission.