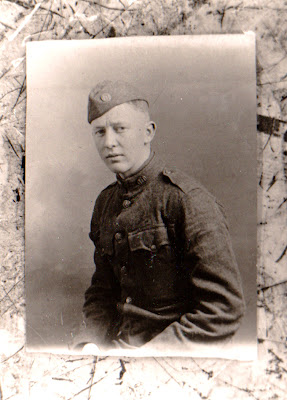 Bent double, like old beggars under sacks,
Knock-kneed, coughing like hags, we cursed through sludge,
Till on the haunting flares we turned our backs
And towards our distant rest began to trudge.
Men marched asleep. Many had lost their boots,
But limped on, blood-shod. All went lame; all blind;
Drunk with fatigue; deaf even to the hoots
Of tired, outstripped Five-Nines that dropped behind.

Gas! Gas! Quick, boys! – An ecstasy of fumbling,
Fitting the clumsy helmets just in time;
But someone still was yelling out and stumbling
And flound'ring like a man in fire or lime...
Dim through the misty panes and thick green light,
As under a green sea, I saw him drowning.

In all my dreams before my helpless sight,
He plunges at me, guttering, choking, drowning.

If in some smothering dreams, you too could pace
Behind the wagon that we flung him in,
And watch the white eyes writhing in his face,
His hanging face, like a devil's sick of sin;
If you could hear, at every jolt, the blood
Come gargling from the froth-corrupted lungs,
Obscene as cancer, bitter as the cud
Of vile, incurable sores on innocent tongues, –
My friend, you would not tell with such high zest
To children ardent for some desperate glory,
The old Lie: **Dulce et decorum est
Pro patria mori. 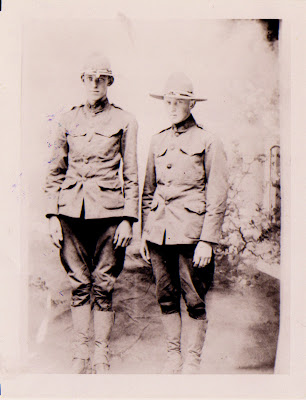 *No, Harley "Dee Dee" Semple and his friend Gene Smith did not perish in the war.

As 17 year olds, he and his friend enlisted (illegally) in the army. According to my uncle, C. Richard Semple, both were sent home after officials found out that they were minors.

However, I always had a sense that the "Great War" had affected him in profound ways, although it is likely he never saw combat.

He went on to marry my grandmother Katherine Olivet Quirk Semple; they bore and raised four children and took in (and adopted) one granddaughter (me).

**It is sweet and proper to die for one's country.
Posted by Jennifer at 11:11 AM