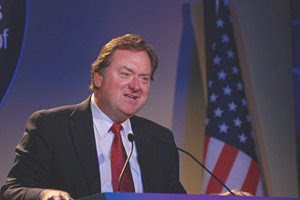 Congress shall make no law respecting an establishment of religion, or prohibiting the free exercise thereof; or abridging the freedom of speech, or of the press; or the right of the people peaceably to assemble, and to petition the Government for a redress of grievances.

Tim Russert, political commentator and host of NBC's Meet the Press, collapsed and died earlier today while working on this week's broadcast.

According to current NBC News anchor Brian Williams, Russert was a huge proponent of the First Amendment and was instrumental in assuring that the first amendment greet visitors to the newly constructed Newseum, which opened April 18, 1997, in Rosslyn, Virginia, and then reopened in Washington, D.C, April 11, 2008.

Most of us remember Russert's famous "whiteboard analysis," especially in 2000 when he emphasized Florida's major role in the presidential election. On a simple whiteboard, he wrote,

Russert's whiteboard analysis had continued throughout the 2008 primary season as he numerically showed how Hillary Clinton's candidacy was no longer viable.

His cutting analyses on Meet the Press and his strong journalistic voice will be missed.

Survivors include Russert’s wife, Maureen Orth, a writer for Vanity Fair Magazine, and their son, Luke.
Posted by Jennifer at 4:02 PM