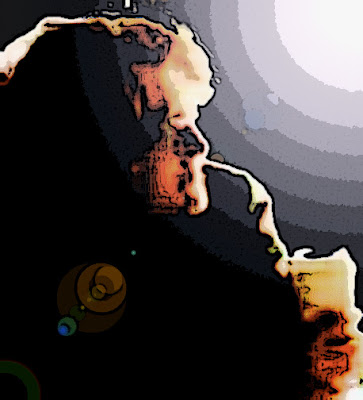 “No, I don’t do demons,” he said, and took a sip of his drink. “That’s a completely different thing.”

“Really?” I thought. “Is he for real?” I looked at Kevin and Sarah, in hope that they might be thinking the same thing. But, no, my classmates remained cool as ice and awkwardly professional, so I had to fight off the urge to laugh and looked at his name tag again. “B. Lenga--Manager,” it said. 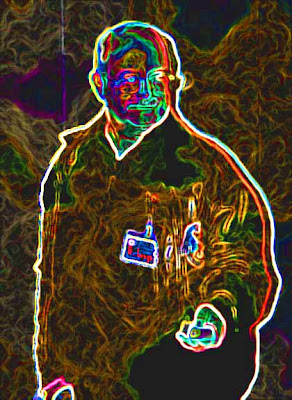 Meet Bill Lenga
Bill was in charge of our on-campus pub and the food and supplies the whole campus was getting. He always wore glasses, a baby blue button up shirt, his name tag and a welcoming smile, like he had been in his line of work for ages. But Bill was a man of many talents, to say the least, which I why we chose him for our final documentary project, as part of our Non-fiction Production course. He was also a judge in his town, but after work each day he took on the job of a ghost hunter. And it was on our first meeting when he emphasized the difference between ghosts and demons. “Demons are evil spirits that don’t come from Earth nor have ever lived here, and in general they are much scarier and more powerful. Ghosts, on the other hand, are just lost souls who used to be humans at one point. They are rarely mean and can in no way harm you.”

“Ahhhhh…,” we nodded. “So, have you always been into ghosts?”

The answer was shocking. It turned out Bill used to be a man of facts and data, a top scientist back in his day, working for the army in Vietnam, where he had his 1st near-death experience. He came back and a couple of months later, after a terrible car accident, his life was hanging on a thread again. Ever since, he had developed some sort of sensibility towards what people call “paranormal” phenomena, and realized that he loved helping all sorts of beings out, both humans and ghosts. And the moment he said that, I knew we were going to have a lot of fun with this video.

Next, we asked him to talk about his personal life and how this “ghost correspondence” affected it.

“Well, everyone close to me knows that I am serious about this, and that I love doing it. I go on holidays with my wife where part of the trip is an organized ghost tour. We meet with other couples in haunted inns, for example, and see whether anything happens. In fact, I am so serious that the International Ghost Hunters Organization has even officially accredited me as a paranormal investigator.” He flashed this license and took another sip.

I must admit I was amazed. I couldn’t wait for the outcome of the project.

Two days later, we met up with him on “an expedition” in Phoenix, New York, and we were not disappointed at all. We were going to explore Sarah’s house, who thought that there might be something more in her basement other than what her and her family were seeing. At this point, however, I found Mr. Lenga as intriguing as the possibility of finding a ghost in the house, maybe even more.

Imagine this timid and welcoming guy, armed with military pants, a Ghostbusters t-shirt, a Wiccan crystal, a couple of weird looking gadgets which resembled Star Trek tricoders and to top it off, a small bottle of holy water. Pure j-o-y and excitement came over me! “This is definitely why I came to the States,” I thought. 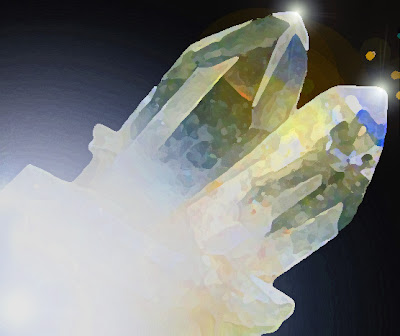 The house was quite normal and cute. The basement, on the other hand, wasn’t! It had all the elements required to do some ghost-busting…low ceiling, not much lighting, things hanging from the top, and three pairs of cat eyes staring at us. Yes, Pandori, Duma, and Sheena simply loved the place. It almost looked as if they admired this 1800’s structure as much we did.

There was no lighting coming from outside, no cracks or windows, nothing that would disrupt the feeling that you might have entered a completely new dimension inside that basement. Being the camera person on the crew, I had to take some time and inspect the place. I freaked out when I saw the stuffed raccoon, which apparently came with the place, but besides that, the only thing that worried me was the lighting. The whole basement had only three light bulbs illuminating it, and no power sockets where we could hook up our reflectors.

Nevertheless, we were ready to proceed and Bill even notified any potential ghosts out there by saying something like: “Dear spirit, we mean you no harm, please welcome us into your humble abode and let us communicate with you.”

My eyebrows almost rocketed out of my face.

“You see,” Bill continued, “to be able to sense a ghost, you need to make sure it knows you are friendly and be open to the experience. If you don’t believe it’s possible, you won’t see it, you won’t feel it. It’s as simple as that.”

He got his tricoder gadget out and started searching for our invisible host. It gave out a random spike or two, but nothing … three minutes, five minutes, eight minutes of nothing. Hope was gone and so was the blood in my shoulder muscles.

Bill put his gadgets down and headed for the entrance of the basement. We were baffled and disappointed, especially Sarah. Luckily, though, the camera was still on because at one point, both Sarah and Bill got goose bumps and shared a very intense look. I knew something was up and the tricoder confirmed it.

It seemed that we had finally grabbed our ghost’s attention, so Bill got the crystal out and started asking it questions. Apparently, the ghost was supposed to answer them by redirecting Bill’s mind power to make the crystal move. Yes-and-no questions only. I held my breath and my camera as I tried to observe the whole process and tackled the insufficient lighting. The image was dark and grainy, it would flash every 10 seconds or so, while my shoulder ... well, it felt as if it was no longer a part of my body. But at that moment the bloody crystal started moving, so there was no time to rest or complain. In fact, the crystal was moving so much so that there was no way Bill could have been cheating.

“Wait. What the …??! Just breathe,” I thought. I was flabbergasted and so was Kevin, who was, by the way, holding the boom mike. We continued our séance with the ghost for about 35 minutes more and then Sarah took over. I remember her asking whether the visions she had as a child of her imaginary friend were actually the ghost we were chatting with right then. The crystal started swinging like crazy and I thought of my imaginary friend, who, I was pretty sure, at least in my case, was all inside my head.

From this point on, things continued quite normally: editing until early in the morning, previews for our professor and peers, follow up interviews with Bill, getting some background footage etc.

“I’m worried about the lighting: I didn’t do a good job,” I said to Mr. Scott right after the first screening of our draft.

“No matter how much I adjusted the settings it would keep flashing … look!” I slowed the video down and showed him.

He crossed his hands and leaned back. He asked for our tape and disappeared, which actually meant that he took it to Master Control to have it analyzed. The guys there were in change of all the equipment and technology at the Park School of Communications, so if anyone knew what was wrong with the camera, it would be them.

Some 15 minutes later, Mr. Scott came back and informed us that we would have to go back to the location again, but this time with a different camera. Evidently, no one had an explanation about the flashes. The camera was new and the sensors were working smoothly so the professionals were just as confused as we were. Oh boy, like we didn’t have things to do.

So, we went back, filmed the sequence again. Bill had a family obligation, so he couldn’t make it, and it seemed that our ghost had arrangements to keep everything still, except the camera image, where the flashes continued showing up. Finally, we got back with the tape and then we had to beg the guys at Master Control to allow us to film the analysis of the second tape, which is a process where they put the tape in a special kind of recorder that analyzes the image and compares it to the camera settings. Surprisingly, the effects on the footage were exactly the same as before and once again they couldn’t explain it. According to them, something was up with the lights sensors, interrupting them, some weird electromagnetic energy. Hearing that, for a moment there, it felt as if I was caught in a Scooby Doo episode, and the Mystery Machine would appear out of nowhere to take us to our new adventure right after we solved this case and exposed the ghost. But, since this was not a feasible scenario for the analyst, he was very careful not to say anything ambiguous and tried to keep the explanation as scientific as possible. This was not what we were looking for as such statements weren’t helping our story, but we didn’t feel the need to ask him to stop as we took the joy out of seeing him confused and sweating the answers out.

At one point I put the camera down and gave out a sigh. This seemed to have got the tech guy’s attention, so he said in an apologetic voice:

“No, definitely not demons,” we said and smiled at each other, and thought of the unusual knowledge we had gained during our spring semester at Ithaca College. 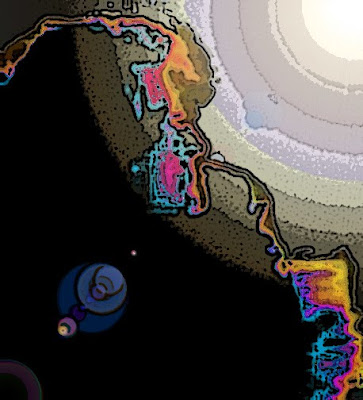 Vesna Ilievska is a fourth year student at Ss Cyril and Methodius University in Skopje, Macedonia. She spent a year at Ithaca College in New York.

“Ghostly Encounters” is copyright 2010 by Vesna Ilievska and may not be republished or reposted without the author's permission.